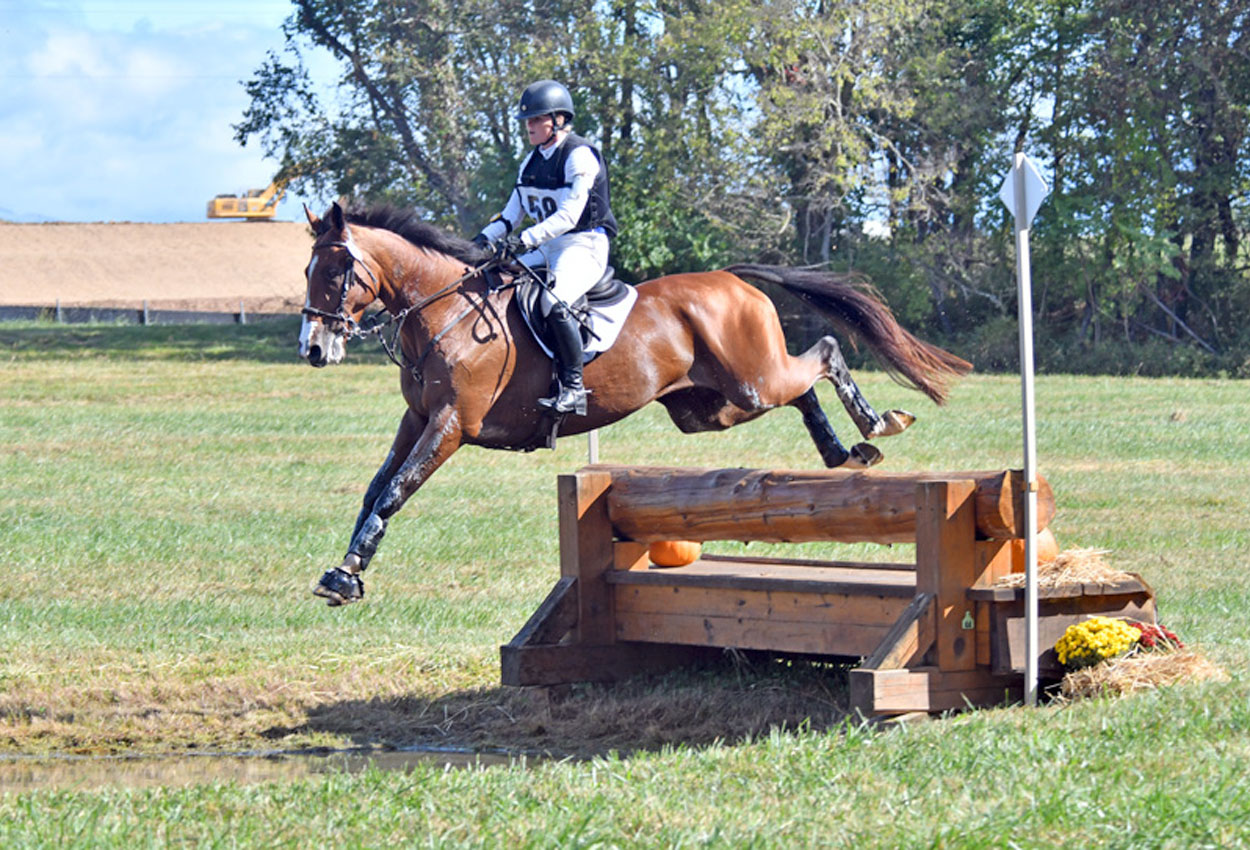 The Chronicle of the Horse

The only goal that Autumn Schweiss had set for her longtime partner, Oakport Strauss, at the Morven Park CIC**, held Sept. 29-Oct. 1 in Leesburg, Va., was to earn a final qualifying score for a CCI** later this year. Instead, the 13-year-old Irish Thoroughbred gelding bested a field of 16 to bring home a victory that was both “unexpected and fantastic” for a challenging horse who just two short years ago suffered a nearly catastrophic and potentially career ending injury.

Schweiss first met “Dave” when he was 6 years old and she was 17. She had just retired her former Young Rider’s horse after complications from surgery, was attending college and trying to juggle three jobs. In December of 2011, she and trainer Jon Holling managed to squeeze in a 24-hour trip to England, where she tried exactly three horses. Dave was the third—he had a few intermediates on his resume but was still green at the level. After he recovered readily from a badly missed distance into an in-and-out during her trial ride, Schweiss was impressed enough to bring him home.

“He had fire in his eyes from Day 1,” said Schweiss. “I should have known then that I had bought more than I bargained for.”

When Dave arrived stateside, Schweiss quickly learned that there was a lot more to him than she had seen during her brief trip abroad. Her new horse was both powerful and flighty; tight and tense on the flat, he also often took rails in show jumping. And on cross-country, “he has run away with me more times than I can count,” said Schweiss. Holling had her do gallops in a hackamore as a truce in the tug of war.

Still, they managed to have some success at the preliminary level in 2012, finishing in the top 10 at the American Eventing Championships (Ga.) that year. Even so, Schweiss found that she didn’t enjoy riding Dave very much, and considered selling him. “He wasn’t the competitive horse I’d thought I had bought,” she said.

She sought help from many top professionals, most of whom said the same thing. “I’ve been told by many that he’s not going to be ‘the’ horse,” said Schweiss. “People would get on him and say, ‘why are you putting the time into this one?’ ”

Desperate to find a solution to Dave’s quirks, Schweiss decided to try natural horsemanship and sought the assistance of Dan James of Double Dan Horsemanship. James worked with Dave for 40 minutes before telling Schweiss that if she was going to get through to him, she would have practice the techniques with other horses first. She spent six months perfecting her natural horsemanship skills under James’ tutelage before turning her new knowledge to Dave.

For nine months, Schweiss did nothing but groundwork and flatwork with Dave. To her relief, she began to see a change in their relationship, and Dave began to show signs of trusting her more and more. “We completely started over,” saod Schweiss. “Somewhere in that nine months I found a whole new level of respect for the horse, and for how to train him. He didn’t even know how to just graze in a paddock—he would just run. He needed me to show him how to be a horse.”

With their newly strengthened partnership, in January of 2014, Schweiss set her sights on competing at the North American Junior and Young Rider Championships at the CCI** level in her final year of eligibility. After an unfortunate rider fall at a preparatory event  left them one qualifying score short, Schweiss hauled Dave for two days from her Florida base to compete at the Copper Meadows CIC** in Ramona, Calif,, the only remaining qualifier on the calendar. Three weeks later, they represented Area 4 at the championships in Lexington, Ky., placing fifth as individuals in the CCI** and fourth on the team. Encouraged by their success, Schweiss began to lay out plans to compete at advanced the next spring.

But in late 2014, while Schweiss was away teaching, the still flighty Dave was injured in a barnyard accident. He compromised the coffin bone and also sustained significant damage to both the deep digital flexor tendon and suspensory ligament in his left front. Schweiss was told that it was going to take a lot of time and money to bring Dave back, if it were even possible to do so at all. She was warned to not push him and to not expect too much; more than likely he would only be pasture sound.

For more than a year, Schweiss diligently and patiently worked with her horse. Even if all he did was hand walk down the road, Dave was kept moving. “I think that was the biggest thing that helped him,” said Schweiss. “He always had unlimited turnout. He never was locked up.” Even if she was away, Schweiss made arrangements to ensure that someone was available to take him down the road.

In 2016, Schweiss casually started riding Dave again. “We started walking, then trotting, and he was sound, and so we tried cantering,” said Schweiss. “Then one day my vet said, ‘you might as well try jumping him.’ ”

Schweiss competed at two events in the late fall of 2016, once at training level and then once at preliminary. They suffered a minor setback at the end of the year when a neck injury began causing signs of lameness, but again Schweiss’s familiarity with her horse helped lead to the best solution.

“For three months, my vets tried to convince me that it was the same injury bothering him again,” said Schweiss. “But I knew it was in his neck. I finally got them to try an injection, and he was instantly sound.”

Early in 2017, Schweiss competed Dave at Red Hills (Fla.), where he felt tight and flighty in dressage. But at Dave’s next event, the Poplar Place (GA) CIC*, Schweiss found herself in first and second place with him and her mare, Jive About Wonderland, heading into cross-country. “But due to the footing that day, I chose to pull him,” said Schweiss. “It wasn’t worth risking a re-injury.” Schweiss is convinced that Dave was mad about her choice; she says he was banging in the stall and when they went to load him to go home, he seemed indignant that he had been denied the opportunity to run.

“Dave does dressage and show jumping just so he can run cross-country,” said Schweiss. “Nothing else I ride runs cross-country like this horse.”

After a successful completions at the Ocala CCI* (Fla.), the pair paced eighth in the CIC** at Polar Place (Ga.) in early September.

When she came off the cross-country at Morven Park, Schweiss had no idea that she was on top of the standings. “We had an OK, but not a fantastic, dressage,” said Schweiss. “But he really jumped his heart out cross-country. I know lots of people were having problems, but I found out my horse was too fit. We took off a stride early at Fence 3. I knew I was in trouble coming out of the start. He ran with me a bit, and I knew I was going to have to work very hard for the next 25 fences.”

But at the end of it all, Schweiss’ deep connection with Dave has led her to a level of confidence in him that she had never expected to experience. “I now feel safer around that horse than I do around 98 percent of other horses,” she said. “I know what to expect.”

With this final qualifier on their record, Schweiss hopes to compete Dave at the Ocala Jockey Club CCI** in November. “He will then have some down time, and maybe then we will think about the ‘A’ word,” she said with a laugh, referring to the advanced level. “But every day is a blessing. I don’t expect this horse to do anything more for me than he already has.”