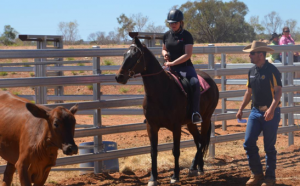 DAN Steers from Double Dan Horsemanship was in town last week to conduct horse clinics, something he hopes to make an annual event.

The Tamworth-based Steers was invited to come to Mount Isa by Jody Turner of Weemala Estate Riding School and Danielle Jennings and spent the entire weeks giving clinics to local horse riders.

“In Mount Isa we started with a five day Colt Start,” Dan said.

“That’s basically where we break in young horses that haven’t been ridden before.”

Dan said the Colt Start ran from Monday to Friday.

“The first couple of days we introduce the groundwork and by the Wednesday we’re off riding them and by the Friday we’re out in the open riding in big groups up and down hills,” he said.

“That’s quite a big step for some people, the majority had never started their own horse before so it’s an experience for the handler as well as the horse.”

Then on the weekend Dan stayed on to do a two-day horsemanship clinic mostly with younger riders, many of them who have only recently learned to ride.

“These are with horses that have been broken in before just to get people communicating with their horses better and learning how a horse can react as well as get some more manouevres,” he said.

“We’ve had a bit of a luxury with the cows arriving so we can work with cattle.” Dan Steers

Dan said he was pleased with the standard.

“What you get in the bush is people who are raised on horses so their skills are often quite high,” he said.

“And the facilities here are good, the campdraft arena is quite new and with them allowing us to use the ground it’s quite a safe area.”

Dan said the organisers were now looking at making the clinics an annual event.

“It’s a good time of time though I just missed out on rodeo week,” he said.

The organisers thanked the Campdraft Association for allowing them to use the facilities for the week and Steers for coming.

“We were really lucky to have Dan here, he’s such a confident horseman,” Danielle said.

Double Dan Horsemanship has two sides to the business with teaching clinics added to their entertainment shows.

The other Dan, Dan James is now expanding the business into Kentucky in the US.