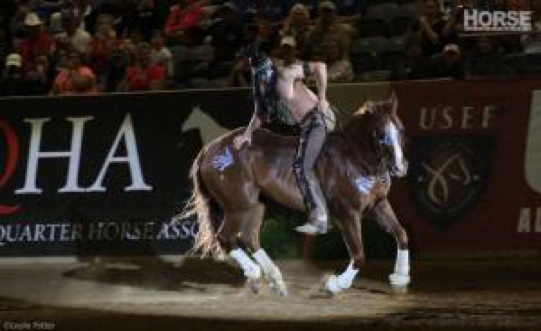 Embarking On A Makeover Challenge? A Few Considerations For Newbies

Earlier this month, the Retired Racehorse Project announced the acceptance of 673 trainers into its 2019 Thoroughbred Makeover competition. At this stage in the game, some of those trainers already have their Makeover horses, while others are still searching, outlining a game plan for the year (final horse registrations aren’t due until Aug. 1). While many of those competitors will be professionals in one of ten competition disciplines, many will also be amateurs, doing their best to improve a horse by early October in hopes of winning the $100,000 grand prize.

With that in mind, a panel of experts gathered in Lexington, Ky., last week to discuss the challenges that can arise for first-time competitors – many of whom may be working with an off-track Thoroughbred for the first time. The discussion was the featured educational topic for the February meeting of the Kentucky Horse Council’s Kentucky Equine Networking Association.

Dr. Fernanda Camargo, associate extension professor at the University of Kentucky’s Department of Animal and Food Sciences, said nutrition tends to be an overlooked consideration, especially for those who are new to Thoroughbreds.

Camargo said training for the Makeover can come with stresses to a horse’s energy needs which may not seem immediately apparent. Although a horse’s work in the several months of the Makeover will likely be less intense than on-track training, they will still be in regular work, increasing their energy requirement. They also may be trailering to shows more frequently, which can burn more calories. Horses in new pasture arrangements can stress weight off if they are low in the herd’s pecking order. Others may be more sensitive to weather changes or flies (stomping and moving away from flying insects does take some energy, after all). Under saddle, a rider’s size and skill may impact the amount of strain placed on the horse, as a less balanced rider will be harder for the horse to carry. An owner more used to stocky horse types is going to have to feed the average Thoroughbred more than they’re used to just to meet their basic requirements, especially those in work.

Camargo often encounters people who think they can maintain horses on hay alone, as long as it’s good quality alfalfa. For a Thoroughbred, Camargo said this is doubtful – based on an example calculation using a nutrient analysis from a typical alfalfa hay, Camargo said a horse in work could need as much as 34 pounds of alfalfa hay daily to meet their basic needs. Grain can help make up for this calorie gap, though experts caution it’s best to feed grain in small, frequent meals.

As an extension agent, Camargo encounters a lot of questions and misconceptions about equine nutrition. One of her most frustrating common myths: alfalfa hay makes horses hot and is bad for their kidneys.

“This is not true. I don’t know why people believe it,” said Camargo, who said alfalfa’s high protein content could only be an issue for a horse with pre-existing kidney disease.

Dan James, trainer and co-founder of Double Dan Horsemanship, gave Makeover newbies some perspective from his background, which has included Mustangs, Quarter Horses, and Thoroughbreds. James has worked with feral horses and problem horses alike and also has experience starting young Thoroughbreds and retraining OTTBs for eventing.

James pointed out that OTTBs won’t need to be completely restarted – treated as if they were unbroke or feral horses. There are some things, like saddling, and the basic walk/trot/canter under tack, that are very familiar to them. One thing they may not come with, though, is the knowledge of more fine motor skills.

“When I’m going through the process of teaching young horses going to the track, under saddle or even with long lines, I actually don’t teach them to back up,” he said. “I teach those young Thoroughbreds the minimal amount they need to know because in high-speed, high pressure situations, the less things they know, the better it is for them. The less buttons, the less things that are going to get in the way to cause confusion.”

For James, this means young horses’ relationship with the bridle is mostly bearing down and running through. It also means they may not know much about lateral work or bending into corners, which requires them to use their backs and legs differently. If their new job requires more exacting movements, that’s going to be the part that takes time, not getting them used to riding across a field.

James also urged Makeover trainers to seek help. Many riders may prefer to bring a horse along themselves, either to save money or for the pride of self-sufficiency. No matter how good you are, he emphasized, this is a missed opportunity for learning. An outside perspective can only help both horse and rider.

Emily Brollier Curtis, dressage rider and trainer in Lexington, urged Makeover entrants to think about the audience for their horse if they’re planning to sell after the event is over. While Curtis prefers a hotter-tempered athletic horse for its agile movement and energy, she recognizes most amateurs are more interested in a horse with a quiet disposition. That, she said, will be most of your market when you go to sell.

In Curtis’s experience, getting an OTTB off the farm and letting them go to a show as a non-compete (a horse not entered but approved by management to walk and hack around the grounds) is incredibly valuable.

Curtis said the Makeover seems to be doing what it’s meant to do – five years ago, she got lots of calls from people offering OTTBs free to good homes. Now, she’s seeing clean-vetting horses reach as much as $3,500 to $5,000 before they leave the track, and the most talented of those can cost upwards of $30,000 with less than a year of professional training if they have a clean bill of health.