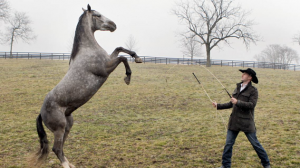 Ten years ago, Texas horsewoman Tootie Bland thought she had witnessed a miracle: a green Quarter Horse so gentled in just a few hours that a rider could stand on his back and crack a whip.

The colt, who just two days before had barely been touched by human hands, was completely unfazed.

She thought it was something she would never see again.

“But I was wrong,” Bland said.

That moment, with famed Australian horse trainer Clinton Anderson, came at the end of Bland’s first competition for “horse whisperer” trainers in Texas.

The image of Anderson on that horse is now the symbol for her event, which has grown to become the Road to the Horse: The World Championships of Colt Starting, a combination competition and tutorial on gentle techniques for bonding with horses.

Road to the Horse will bring its 10th-anniversary celebration, Friday to Sunday, to the Kentucky Horse Park in Lexington, where the event probably will remain for years.

Horse Park director John Nicholson said it could become a signature event for the park, drawing thousands annually to Lexington from all over the world.

“This probably will be the largest crowd in the arena since the World Equestrian Games,” Nicholson said, referring to the 2010 event.

The arena seats 6,000 people, and extra seating will be set up to accommodate more spectators.

What will they see?

Trainers and unknown, unbroken horses come together and form a partnership in three hours, over three days, live, one on one, in round pens in the arena.

“It speaks to the core of all of us. It’s about trust,” Bland said. “These lessons go further in our lives than just the animals. … Acceptance, that’s what is happening in those round pens. There is no script. It’s all happening before you.”

Spectators sit rapt, on the edges of their seats, watching every ear twitch, every kick, every nostril quiver for that moment when animal and human bridge the species divide.

“The audience will know when things are not working,” Bland said.

Breakthroughs can bring people to tears and the crowd to its feet.

Trainers see it as a challenge, Bland said, to show thousands of people what can be done.

At the end of the weekend, trainers face a final test: take this horse through a tricky obstacle course. Competitors are judged on their ability to communicate respectfully with the animal, not necessarily on how well the horse performs.

“When it started, I didn’t believe it,” Bland said. “But every year after that gets more amazing.”

Most of the trainers are world-renowned, and fans come from far and wide to cheer for their favorites, and watch clinics and demonstrations of amazing horsemanship skills. Thousands more people watch the event online.

One goal of the event is to spread the techniques of gentle horsemanship.

“What it’s done for the horses has been incredible,” Bland said. “They take back all that knowledge and share it home.”

Last year’s competition, a team event, was won by a pair of Australians, Dan James and Guy McLean.

They are returning to face two American women, Sara Winters and Obbie Schlom, an 18-year-old horse-training “phenom.” This year’s competition will be individual, so it will be every rider for himself or herself.

But James might have a hometown advantage. He moved to Nicholasville after performing a “liberty” act with his Australian training partner, Dan Steers, at the 2010 Alltech FEI World Equestrian Games. James works with young Thoroughbreds for Taylor Made Farm in Nicholasville when he’s not traveling around the country performing with his horses.

James has a treat planned for Road to the Horse fans: He is bringing back his 2012 winning mount, a dapple gray gelding nicknamed Swampy, to show how far the horse has come.

Swampy now does “liberty” work — performing without halters, reins or a saddle — alone and with a team of horses to James’ cues.